If you love solar and want to share your passion during the holiday season, here are some ideas for gifts that can spread solar joy.

Spread solar knowledge to the next generation with cool kits that entertain and educate. There are a ton of solar car kits like the 4M Solar Rover but the solar robotic kits seem to have more to keep kids occupied. The Deluxe Eco Robotics kit has 14 robots that can be powered by the solar cell and the Solar Deluxe Educational Kit offers great experiments for the budding electrical engineer.

Many of us of a certain age really mean it when we say we don’t want any more “stuff” as gifts. But there are plenty of people on the planet who need the basics. Give the gift of solar light or solar cooking to a family in a developing nation. UK-based Solar Aid lets you sponsor one or more solar lamps to help families move away from pricey and polluting kerosene lamps.  Another idea: Solar Cooking International, rated highly by Charity Navigator and based in Sacramento, CA, works on the larger problem of clean cooking fuel.

The storms of 2017 had many people reassessing their family’s emergency plans. Having a small back up power source that is portable can be a great idea, and provide enough energy for recharging essential communications equipment. The Goal Zero Yeti 400 is one example, and most can be charged by plugging in to an outlet at home, and recharged when the grid is down or you're on the road by using a portable solar panel like the Goal Zero Boulder 100. 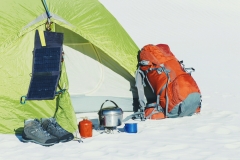 For the outdoorsy type

Looking for something even more portable? There are a ton of great solar gadgets for campers. A great start is a simple solar lantern like the Ultimate Survival Technologies Sprite Solar Lantern. There are also flexible solar panels that can recharge a range of devices, solar-powered weather radios, solar showers, solar camp stoves, and, of course, sunscreen.

Stringing low voltage wires throughout garden beds is fast becoming a thing of the past as solar-powered garden lights become more powerful. Between energy efficient LEDs and better solar cell technology, there are solar powered lights that can cast more than a faint pool of light on a path. There are plenty of brands out there and it’s worth shopping in person at your local irrigation, hardware, or garden supply store as it’s hard to tell which are plastic and which are rugged metal designed to last for years when browsing online. Looking for something fun or decorative? Gardener’s Supply Company has a range of solar-powered garden lights and fountains.